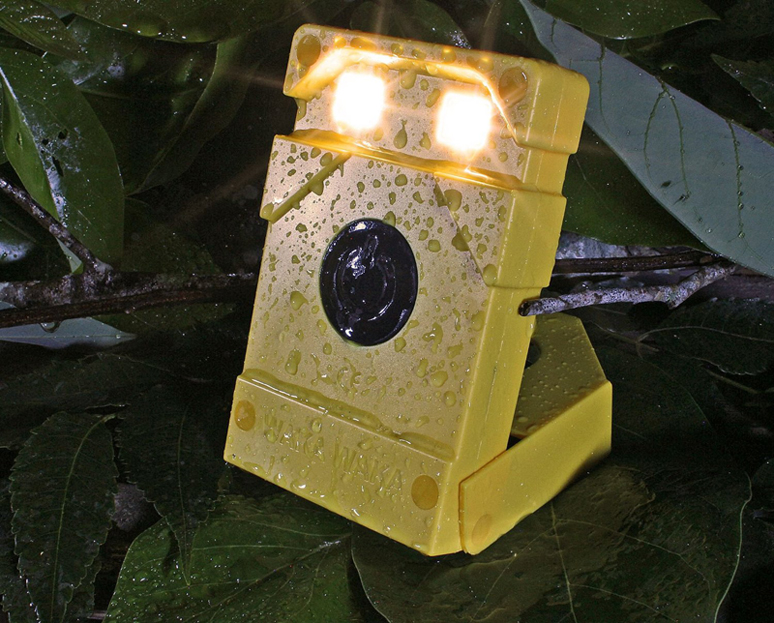 What did one solar lamp say to the other solar lamp? Nothing . . . solar lamps can’t talk. WAKA WAKA!

Sorry. I was just looking for a way to make the Fozzy Bear reference with a solar lamp named Wakawaka. If you don’t know what I’m talking about, look it up.

Joking aside, this is actually a pretty cool lamp.

What do you need a lamp that is capable of providing 8 hours of bright ambient light or 16 hours of reading light on an 8 hour charge? Yeah, why does anyone need light right?

This lamp is claimed to have been built with the idea of handling the ecosystems of Africa. No lie. That’s pretty serious, but most people will probably want to use it for an emergency light in case the power goes out.

This lamp can be used as an SOS beacon or can shine as bright as 120 Lumen (or 200% brightness for you newcomers). Seriously though, the Wakawaka Solar Lamp has a variety of uses. You charge it for 8 hours during the day, and then you can use it all night if you know what you’re doing. You can put it in a car for emergencies or bring it camping.

Again, if you need light, this is going to give it to you.

Battery Charge (8 hours in the Sun):

The company purposefully bills this as a solar lamp that is priced so you can have more than one. You can have one for the house and one for the car. Everyone on a camping trip can even have their own. You’ll light up the forest like it’s Christmas!

There is a whole lot of good about this lamp according to its various reviewers. It really doesn’t seem like you can go wrong with this one.

Most important is that this lamp does as it’s billed. Multiple reviewers report that this lamp lasts absolutely forever. Most people not how even after a day’s charge, and then you leave it in a closet for a while, it’s going to be ready to go. It can also charge in ambient light, not just direct sunlight.

The lamp itself has solid construction and is built to last. It’s solidly constructed so it’s going to be ready when you need it.

There isn’t a whole lot of bad about this lamp out there. Some nitpicky stuff from some people, but nothing that is really going to ruin the day. Some people seem to say that the instructions for it are not very helpful, but it can be solved with some tinkering.

While many say that it is of sturdy construction, others seem to think it has a cheap, plastic feel to it, but again, nothing seems to take away from the fact that this is going to last.

The most valid complaint in my opinion, is that there is no external way to charge this lamp, but that kind of would defeat the point wouldn’t it? This is purely a 100% solar charging lamp.

You’re really not going to find a solar panel lamp that is going to give you the long lasting light on pure sunlight like this one does. For the price, the Wakawaka lamp might just be perfect.